On June 19, IGRA is hosting a day of lectures that were originally given at a variety of international conferences in the past year. We are bring those lectures together at the ZOA House in Tel Aviv, so that those who were not able to go to those conferences can hear some of the top lectures in Jewish genealogy.

There will be concurrent lectures in Hebrew and English throughout the day, which will be followed by the IGRA Annual General Meeting (AGM). Lectures are open to everyone (60 NIS for members and 90 NIS for non-members, including lunch), while the AGM is open only to members of IGRA.

Doors will open at 9:30 am, followed by the keynote lecture by Prof. Gil Atzmon at 10:00 am on the topic of The Jewish Genome in Jewish History.

At 10:45 am the dual language tracks will begin, which will include five lectures in each language. See the full schedule below: 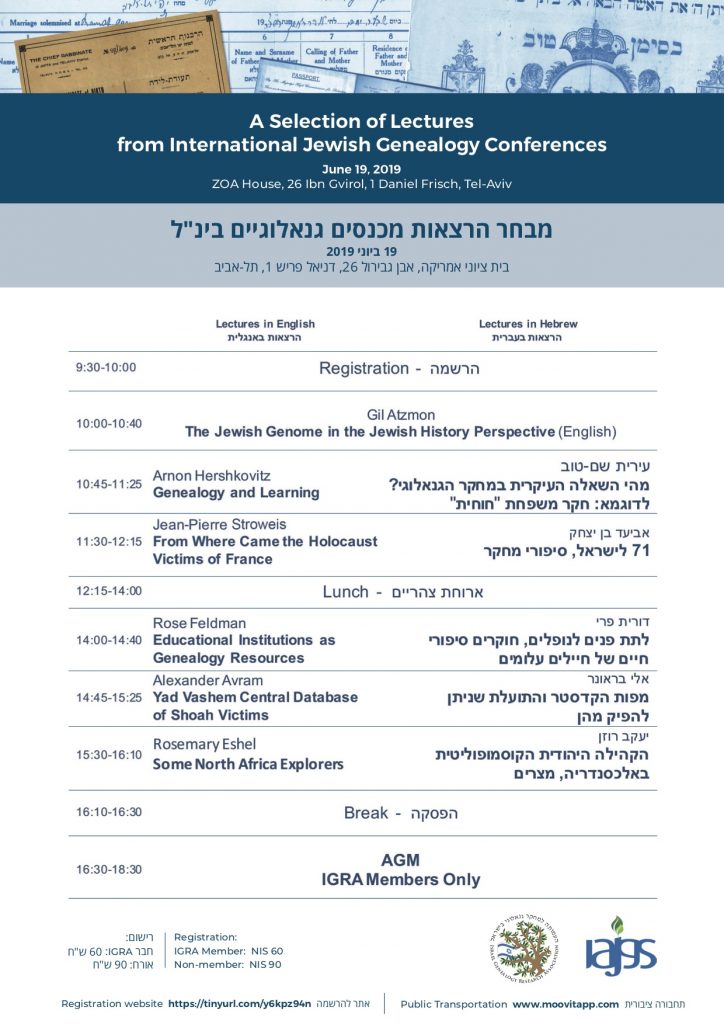 Cost to members for this all-day event is 60 NIS, and 90 NIS for non-members. The cost includes lunch.

To register for the event, go to the event registration page.

The day of lectures will be followed by IGRA’s Annual General Meeting (AGM) at 4:30 pm, which is open only to members of IGRA. You do not need to attend the day or lectures to attend the AGM, these are separate events. The AGM will include the election of two members to the board for two-year terms and members of the oversight committee for one-year terms.

Celebrating Spring – IGRA increases records on the All Israel Database

The Urban Jewish Population in Eretz Israel from 1839 – 1948: Censuses and Voters’ Lists, by Rose A. Feldman, Database coordinator for IGRA