Ada Holtzman (1951-2016) was born on Kibbutz Evron, where she was buried. She had a tremendous influence on the Jewish genealogical community, mainly thanks to her extensive research of many Jewish communities in Poland, beginning with her own ancestral town, Gabin (pronounced and known by the Jews as Gombin). Both of her parents were from Gombin, and they immigrated to Israel in 1939. Among her many projects, one of the biggest was researching and memorializing Gombin, both on her website, and as a leader of the Gombin Society in Israel. 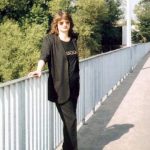 She worked as a sales analyst at Alitalia, and she put her expertise to work on her website. She is remembered for the website “zchor!” meaning remember (http://www.zchor.org). Zchor! was a command, not an option, for her, which she also intended for all of us. The website still exists but remains unchanged since Ada’s death. She also volunteered to establish websites for Bialystok and the vicinity and many other towns.

The list of projects that Ada was involved with preparing and donating to JewishGen.org is lengthy. Considering that her life was cut short, she accomplished an amazing amount of writings and translations.

Ada cooperated with Benjamin Meirtchak (Chairman of the Polish Residents’ Association) and edited his major effort of documenting the Jewish soldiers who died fighting in the Polish Armies, Jewish Military Casualties in the Polish Armies in World War II. He himself had been an officer (reaching the rank of Lieutenant Colonel) in the Polish Army in the USSR, after being imprisoned in Soviet concentration camps. He was also wounded in action. There are five volumes in the series of books on this topic:

Volume I: Jewish Soldiers and Officers of the Polish People’s Army Killed and Missing in Action

All of the material in these books was donated to JewishGen.org.

Having met Daniel Wagner by chance in the summer of 1999 in Zdunska Wola, they jointly created an early listing of tombstones in the local Jewish cemetery.

At www.zchor.org, I have found a poem by Ada entitled “We Are Still Here”, which deals with the return to Gombin of survivors, and the memory of families born there.

We Are Still Here

After more than half a century we are still here,
Back to Gombin, with a smile and a tear,
Descendants, survivors from five countries flew,
To visit the hometown so old and so new.

Birth place of fathers and mothers,
Of uncles and aunts, cousins and others,
We all share the same past, same common history,
And remember the Shtetl and its lost faded glory.

United in grief, together we prayed,
And the Kaddish again loudly was said,
We swear it will never happen again,
And we shall not forget, Amen and Amen…

This website uses cookies to improve your experience while you navigate through the website. Out of these, the cookies that are categorized as necessary are stored on your browser as they are essential for the working of basic functionalities of the website. We also use third-party cookies that help us analyze and understand how you use this website. These cookies will be stored in your browser only with your consent. You also have the option to opt-out of these cookies. But opting out of some of these cookies may affect your browsing experience.
Necessary Always Enabled

Any cookies that may not be particularly necessary for the website to function and is used specifically to collect user personal data via analytics, ads, other embedded contents are termed as non-necessary cookies. It is mandatory to procure user consent prior to running these cookies on your website.