Genealogy forms are useful to all people researching their families. For those getting started, forms offer a great way to get started with collecting your family information. For those who already collect their information in a dedicated genealogy computer program, sending forms are a good way to collect information from distant relatives who might otherwise leave out important information when simply sending an e-mail. Some forms are research-oriented, like the US Immigrant Census Form below, and are useful to researchers no matter their level of experience.

The forms on this page were developed by IGRA member Philip Trauring, and were originally made available through his Blood and Frogs: Jewish Genealogy and More web site. They have been cited in Avotaynu’s Nu, What’s New? newsletter, on Genea-Musings, and are listed in many genealogy resource guides like Cyndi’s List. For more information on these forms, and to comment on them, you can also go to their original page on Philip’s blog.

These forms are designed to work together. For example, you can use a Sibling form to add children to a Family Form, or use it as a list of siblings of a Source Person or one of their parents on the Ancestor Form. When you fill out a Family Form for parents that are in an Ancestor Form, you can link the two by adding the number of the Family Form to the Ancestor form (between the names of the parents).

These forms are designed to print equally well on Letter size paper (for US users) and A4 paper (for everyone else). The forms can be printed and then filled out, or filled out on the computer and then printed. If you don’t want to print them at all, just fill out the form and save it as a new PDF, and you won’t need to waste any paper.

Some users of Adobe Reader have reported problems saving the forms, but all you need to do is use the ‘Save As…’ menu item instead of ‘Save’ and it should work fine. Just save a different copy of the form for each person you are filling it out for, and add the person’s name to the file name. On the Mac you can also use Preview, which comes with your computer, to fill out the forms.

A neat feature of the PDF forms is that if you fill out a name and it seems that it will be longer than the field allows, it will actually shrink the letters so they all fit visually once you leave the field. 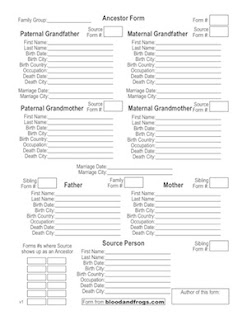 The Ancestor Form is what is usually called a Pedigree Chart.

On the top left of the page, you can add a ‘Family Group’ name, which is the surname you want to organize this file under. You don’t need this, but it can make organizing the forms easier.

On the top right, you assign the form a number. Make sure to add the number and other details to the Form Index Sheet to help you keep track of all your forms. 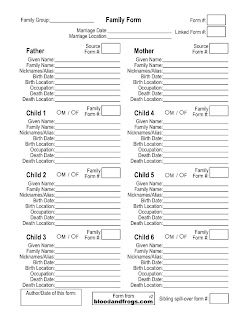 The Family Form is a form that lets you fill out information about a nuclear family – parents and children. There is room for two parents and up to six children.

If you need to add more than six children, you can use a Sibling Form for the spill-over. Just add the number of the spill-over form to the box on the bottom right so you know which form is connected to which.

For each parent in this form, if they show up a Source Person in an Ancestor Form, you can write in the number of that form in the box next to their name on this form.

For each child in this form, if you have a Family Form for them, you can write in the number of the Family form in the box next to their name on this form. 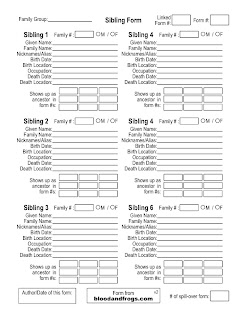 The Sibling Form can be used to show the sibling of a Source Person or their parents in an Ancestor Form, or as spill-over for the Family Form for families with more than six children.

If the sibling listed shows up as an ancestor in other forms (such as a grandfather in an Ancestor Form) you can list the form numbers where they show up in the fields provided. 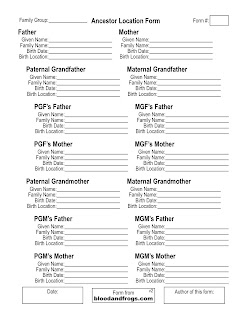 The Ancestor Location Form is more of a specialist research form. You fill the form out with the names of your parents, grandparents and great-grandparents, along with their birth dates and birth locations.

The concept of the form is to allow you at quick glance to see all the locations and dates relevant to your immediate research.

This form is helpful for seeing quickly what pieces of information you are missing. If you don’t have a birth date for one ancestor, or a location for another, it will help you focus on the next steps in your research.

For Jewish researchers, you can fill out this form before adding your family names to the JewishGen Family Finder to make sure you don’t leave any surname/location combinations out.

The US Immigrant Census Form is the first in a series of forms to help genealogists, both beginners and experienced, to focus their research efforts. This form helps you to collect information from US Federal Censuses between the years 1880 and 1940. This does not include 1890 as the 1890 census was almost completely destroyed by a fire. The focus of this form is to collect the information that is useful in finding out more information about this particular immigrant. 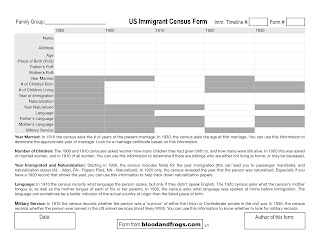 This form does not cover censuses before 1880, but by all means you should check those if the person you are researching lived in the US during an earlier census. The reason the form starts in 1880 is partly due to space issues, partly due to more useful information being collected in later censuses, and partly because of the large number of immigrants that arrived in the 1870-1940 period. 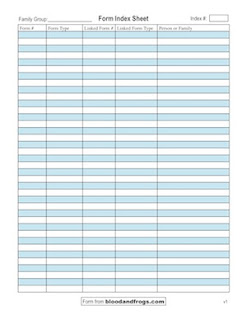 As you might guess, the Form Index Sheet form simply exists to help you keep track of the other forms. Each time you fill out a new form and assign it a number, add the form to one of these pages.

When a form is specifically linked from another form (such as a Sibling Form) there are fields for showing which form it was linked from.