Created by Harvey Kaplan in June 2012

Formal Jewish communities in Scotland were established c1816 in
Edinburgh and c1823 in Glasgow, although there were a 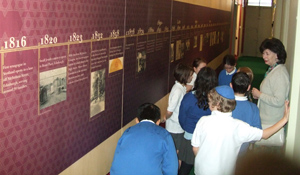 small number of Jews in Scotland from the 1700s onwards.  There are currently Jewish communities in Glasgow, Edinburgh, Dundee and Aberdeen, although Jewish individuals and families have always lived in other parts of the country. There were once small communities in Ayr, Dunfermline, Falkirk, Greenock and Inverness.
Jews appear in civil records of births, marriages and deaths in Scotland, as well as census records, school admission records, city directories and naturalisation files (available at the National Archives in London and indexed online).
The main source for specifically Jewish records in Scotland is the Scottish Jewish Archives Centre, based in the country’s oldest synagogue (1879).  This year the centre celebrates its 25th anniversary.
The Archives Centre receives hundreds of research enquiries each year, many of them from

people tracing their family history.  A lot of these enquiries come from researchers in Australia, the USA or Canada, whose ancestors were Jewish immigrants from Eastern Europe who emigrated to Scotland, before moving on to these countries.

The Archives Centre has a range of resources for tracing Jewish family history in Scotland:
• A computer database which collates and cross-references over 70 lists and sources, including: cemetery records, synagogue registers, naturalisations, charity subscription lists and school admission registers.  The database contains records on 38,000 Jews in Scotland.
• The records of the 17 Jewish cemeteries in Scotland (Aberdeen, Dundee, Edinburgh and Glasgow).
• Synagogue registers of births, marriages and deaths and copies of some circumcision registers.
• Glasgow Jewish newspapers, which often contain personal announcements.
• Records of congregations, social, welfare and cultural groups, educational institutions, youth groups etc.
• An oral history/personal testimony collection and a large collection of photographs.
• A collection of records relating to Jewish refugees from the Nazis in the 1930s who fled to Scotland, as well as Holocaust survivors.
Please contact the Archives Centre if you would like to arrange a visit or to hear about forthcoming events.
Scottish Jewish Archives Centre
Garnethill Synagogue
129 Hill Street
Glasgow
G3 6UB
0141 332 4911
www.sjac.org.uk
info@sjac.org.uk